After the re-opening to the public of the house, now entirely restored as closely as possible to its original state in 1929, this book narrates the full story in the context of modern architecture.

Jean-Louis Cohen has put together contributions from a team of authors all specialising in modern architecture, Eileen Gray or Le Corbusier. It also includes accounts from witnesses and neighbours who were close to Eileen Gray and Jean Badovici. The very people who worked on bringing the villa back to life reveal the secrets of an exemplary restoration. A recent photographic survey by Manuel Bougot enables the reader to visit the site in every detail, and to discover every object in it.

The book takes the reader right to the heart of a remarkable adventure.

A modern house par excellence, Villa E 1027, in Roquebrune-Cap-Martin, was built between 1926 and 1929 by the artist and interior designer Eileen Gray for, and in collaboration with, her friend the architect Jean Badovici. Everything in it was designed down to the last detail, from the building to the furniture and the lighting features and even to the design of the garden overlooking the Mediterranean.

After Badovici’s death in 1956, there were owners who made some often regrettable alterations. The furniture was sold or disappeared. When squatters moved in, it was abandoned. In 1999, the house was bought, along with the site, by the Conservatoire du Littoral, and in 2000, E 1027 was listed as a Historic Monument.

E 1027 is inseparable from the snack-bar “L'Étoile de mer” and Le Corbusier’s Cabanon and holiday cabins, located a stone’s throw away. Thus, in 2000, in order to protect the whole site, Robert Rebutato, son of the man who created the L'Étoile de mer, and his wife Magda, set up an Association to protect it, and which continues to manage the cultural life of the site.

From 2014 to 2021, the Cap Moderne Association, presided over by Michael Likierman and assisted by a Scientific Committee directed by Jean-Louis Cohen, took on the final restoration of E 1027 – the subject of the book – and the management and promotion of the whole site, henceforth named Cap Moderne. It is now managed by the Centre des Monuments Nationaux. 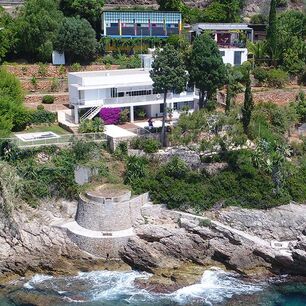